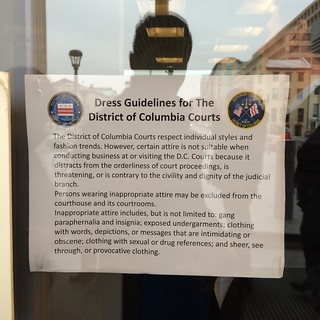 I had been called to jury duty several times before, but never selected. Steph is an attorney, Charles was an investigator, people in my family have gone to jail, and I’ve seen enough movies to know that the police can be compromised (Blade, for instance).

So I was confident I could weasel out of my latest summons, and all the more so when I learned the case was a DUI. I stood before the judge and stoically recounted the times I had found myself on the hoods of thoughtless motorists. Why, your honor, I half-chuckled, I would have been standing here in November if a driver hadn’t broken my collarbone and driven off.

But do you think that experience would interfere with your ability to judge this case impartially?

No, I replied. I held my gaze steady and locked on the judge, confident that, in the periphery of my vision, the attorneys would see the zeal for bicyclist jihad that was blazing in my eyes. I would surely be struck from the jury pool, freed by my victimhood.

Well, no such luck. I was selected for the jury and spent the next day listening to a very brief trial. The facts were these.

Around 3 AM on a Thursday morning, the defendent emerged from a cab on a side street in Adams Morgan. She walked past three bike cops–unsteadily, though perhaps not staggering–and got into her car. Moments after she had started the engine, an officer was tapping on the glass, asking her to get out. She had some trouble producing her license, and left the car in gear when she first tried to emerge. It lurched and she had to hurriedly swing her body back inside to brake. She never left her parking spot.

She admitted to having a drink, but said she thought she was okay to drive. She then failed the first of three field sobriety tests–the horizontal gaze nystagmus test, the one where the officer makes you follow a point with your eyes–displaying six out of six potential indicators of intoxication. She then began to fail the next test (walking a straight line), but refused to complete it, saying it was too late in the evening. She refused the third test as well (standing on one foot), and so was cuffed and taken to the Third Distict station. There she refused to use the breathalyzer, acknowledging on a form that this meant she would lose her driver’s license for twelve months.

So. That was the prosecution’s case. The defense took its turn, but was unimpressive. There was some inconsistency in how the testifying officers described their physical locations on the street relative to the defendent. The newest cop was caught claiming that he could smell alcohol on the defendant from fifteen feet away.

Here, the defense convinced me: the uniformity of the police claims of alcoholic odor and bloodshot eyes were suspicious. I’m not trained to watch for such things, but I don’t think I’ve noticed someone smelling of booze more than a handful of times; other signs of drunkenness seem much easier to detect. In rooms where videos like this one are shown, I have no doubt that officers are told they should always claim these unverifiable impressions.

The extent to which the police had been trained for the courtroom was subtle but impressive. The defense asked if the testifying officer was familiar with a textbook about field sobriety tests; in fact he not only knew it, but could name distinctions between its editions, identified to the month. The tech from the station was eager to explain the difference between the semi-discredited Intoxilyzer and the new and faultless Intoximeter.

More than this, their affect and conduct made an impression. The steady eye contact with the jury; the friendly confidence; the polite references to the defendant; the lack of mistaken use of gestures or imprecise speech, knowing that they were participating in the creation of a written transcript. I couldn’t help wonder whether the second officer–an MPD veteran of several years–was putting us on when he appeared uncertain about how to approach the witness stand or navigate the courtroom’s other logistical minutiae. Surely he had done this exact thing dozens of times in this very building, probably in this very room.

The defense amounted to little more than nitpicking. No witnesses, brief cross-examinations. We went to the jury room without much doubt about the evening’s events, but unsure whether they were enough to produce a conviction.

Per the judge’s instructions, two standards had to be met. Was the defendant operating the vehicle in DC? The law says that you merely have to be “in control” of a vehicle. It doesn’t even have to be running! Pushing a car out of the snow or leaving your hands on the steering wheel can qualify. We all agreed that this criterion had been met.

The other standard related to the defendant being “under the influence of alcohol”. This means impairment of her ability to operate a vehicle to an extent that could be perceived. There is no specific threshold or test that divides impairment from non-impairment.

Interestingly, the judge’s instructions stated that the defendant’s refusal to take the breathalyzer could enter into our consideration. Specifically: this refusal could be interpreted as evidence of “feelings of guilt”, which could in turn be taken as evidence of actual guilt. Steph feels this is unconstitutional, and I admit that it felt a bit fishy to me, too. But it was plain as day in the instructions.

The jury quickly settled into a 10-2 split favoring a conviction. One dissenter remained quiet, but the other was happy to argue on the defendant’s behalf. I sat next to this gentleman during the trial, and found him to be friendly and pleasant. But he was a bad juror. He seemed used to being afforded respect and being celebrated for his cleverness. At home I suspect he is considered a man of erudition. Alas, his arguments betrayed an imprecision of thought and an eagerness to use the proceedings for a sort of role-playing.

Among the arguments he brought to the table:

Basically, justice is terrible. Many of the other jurors weren’t much better, confusing facts and engaging in inappropriate flights of speculation before being shut down by their peers.

I don’t know that I was so much better. I could assemble relatively cleaner arguments, but I left the courtroom feeling equivocal about the presumption of innocence and reasonable doubt; and I was saddened by the likelihood that the police had watched a drunk woman walk to her car, patiently waiting to stop her until she had–just barely–committed a serious crime. I walked into the jury room thinking “guilty”, but the sense of the majority cemented this from opinion into belief. At some point I stopped bothering to dismantle bad arguments coming from those on my side.

And the rhetorical skills lacking in some other jurors lacked amounted to little more than a clumsiness at manipulation. At one point we received an answer to a question we had asked the judge, and the answer undercut the argument for exoneration. My fellow jurors immediately pounced on the hold-out, browbeating him with this new fact rather than giving him space to admit a change of heart while retaining some dignity. I found myself waving them off, even though I agreed with their position. I wanted to get out of there. I was ready to bend the conversation to that need.

The holdout’s ego survived this attack, and he reluctantly agreed to a guilty verdict. Besides, he noted, he had a lunch appointment to get to. A verdict was read to an impassive defendant, whose life became much (but I hope not disastrously) worse. We were thanked for our service, collected our $4 per diems, and walked out into the cold, mostly confident that we had done something.