We had been feeling cross about Uber. This is, by far, the subject about which Steph and I fight the most, as the service’s admittedly poor routing prompts different and conflicting reactions from us. She cannot resist reaching across gaping chasms of culture, language and basic navigational competence to put our drivers on the right path. I prefer, in characteristically nonconfrontational style, to quietly abandon myself to fate, gladly surrendering a few hundred meters or cents if it saves everyone some embarrassment.

This was the first Uber we had taken in Paris–hoofing it from Île Saint-Louis to Canal Saint-Martin seemed unappealing, especially since we’d dawdled longer than we’d planned. Mostly the ride was great. Our driver Radhouan spoke no English but was impeccable at piloting a black sedan while wearing a suit and bald head, in exactly the way that people in movies often do before being beaten up by Jason Statham.

Our plan had been to start at the south end of the canal and pick a restaurant as we walked north. Instead, Uber’s geocoding dropped us closer to the Porte Sainte-Martin. 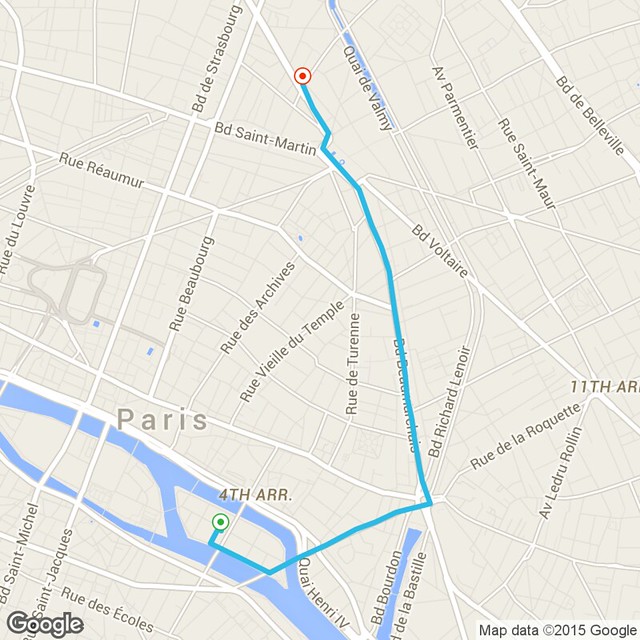 We walked a few blocks past tiny, packed restaurants, many featuring diners sitting outside under heaters. The neighborhood was clearly cooler and younger than the tourist-filled center of the city where we’d been spending our time.

Soon we reached the canal. I thought it was obvious that most of the restaurants would be south of us, but Steph wanted to go left and I was already in hot water for my poor piloting of the Uber app. So left it was. As we walked, a police car’s blaring siren tore past us, headed south, and I made a lame joke about it not being very romantic.

The restaurants were indeed more sparse to the north, so when we found Les Enfants Perdus we quickly went in.

Five minutes, we were told. No problem: the bartender looked like he knew what he was doing. I ordered a Sazerac. Not-particularly-soon-after we were seated uncomfortably close to an older couple, just past the bulk of the bar.

When did it stop being a regular meal? I’m not entirely sure. The wait staff locked the doors at some point, but I thought perhaps dinner service was ending. Waves of additional emergency vehicles sped south, but this was a city, after all. Snippets of English kept reaching us from across the room, containing increasingly alarming words. With growing frequency, the sound system erupted in booming, buzzy hums as the staff swapped out iPhones to take calls and send urgent texts. Bit by bit, we all stopped looking at our companions and food and began staring into our smartphones. 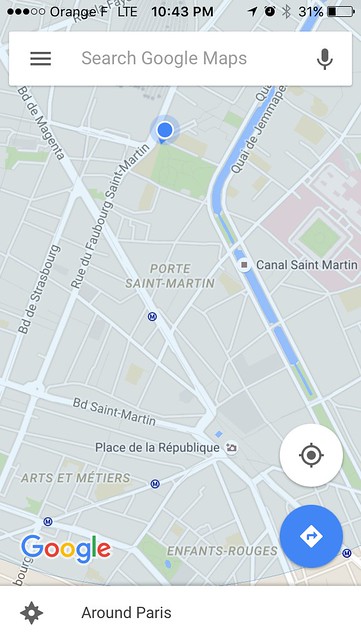 I’d drunk enough to want to make off-color jokes on Twitter, so I set about doing that. Steph and I didn’t think there was much to be done but to wait out the emergency, so we ordered more drinks and more dishes, which were slower and slower to arrive.

The rumors in the room and online intensified. We soon heard about the siege at the Bataclan, though not yet the full extent of that horror. But people were saying this was not all, that drive-by shootings were still occurring, that a new attack was unfolding at Les Halles, far from our restaurant but quite close to our apartment. No one denied that gunmen were still at large.

It did not seem safe to go outside. Soon, the staff acknowledged what was occurring: a blonde waiter without much English did some comic capering to lighten the mood, and his colleagues assured us that the restaurant’s large glass windows were bulletproof, which seemed unlikely. The neighborhood was now cordoned from traffic, they said; there would be no taxis. The owner announced that everyone was welcome to stay, but the staff would call the hotel a block away on our behalf if we’d like.

We stayed. Many diners left for nearby cars or short, furtive walks home. Eventually only four or five parties remained. The staff asked us to assemble at one table and assured us again that there was no need to leave. They opened some bottles of champagne, they put on the Beatles’ White Album. The doors were declared to be definitively locked, and cigarettes appeared as if by sleight of hand. The blonde waiter sat down with us, said he had given away his tickets to that evening’s show at the Bataclan, and began weeping. I watched as Steph comforted him. I continued to check my phone.

By two AM, I was thinking seriously about sleep and how glad I was that the restaurant’s back room decor featured padded benches and implausibly fluffy pillows. But our fellow diners were restless. Group by group, they decided to walk. We checked the hashtag that the media had been writing about, the one by which Parisians were offering refuge to those stranded on the street. Useless. Steph called some of the nearby hotels, but they couldn’t help.

So: bikeshare. There is a Velibe station in front of Les Enfants Perdus, but not one that takes credit cards. Our maître d’ led us through a block and a half of empty streets, and then several pages of inscrutable French bikeshare menus. We looked with fear into every car that passed.

I hope I will never see Paris that empty again. Police cars prowled the streets, activating their sirens every other block. And there were people, more than I expected, but all walking in the same direction or huddled in doorways, speaking urgently into their phones.

The Velibe top gear is much better-considered than D.C. bikeshare’s, and we plunged through the streets. Outside a nightclub people were massing, piling into cars. I remember desperately wanting to get away from them, from any group of people, any crowd. But otherwise the ride felt quiet, urgent, unpanicked.

A wrong turn dropped us too far west, in front of a police station across from Notre Dame. Men in police jackets were milling around on the corner, looking unsure of what to do, as if the real cops, headed to Saint-Martin, had told their little brothers to put on ill-fitting departmental jackets and do their best. We biked past the cathedral, finding more police guarding the monument–some sitting near-invisibly in nondescript cars. Ever since landing our Americanness had been reliably detected from hundreds of meters away, and this was no exception. The cops saw us, but melted from our path.

We dropped our bikes at a station next to the Seine and crossed to Île Saint-Louis, immediately feeling safer for no good reason. Soon we were in our apartment.

I kept thinking about what I’d read: that people in the Bataclan had sent messages begging the police to come, that they were being executed one by one. That was the thought that horrified me more than any other. But soon sleep came. I woke up feeling no wiser than the morning before.